I’m not much fond of the “Let’s hope for the new year, let’s look at the past year“ posts, but this time around I’ll make an exception, because in my life, this year have been an exceptional year indeed, in good and bad of course.

For what concerns my personal life, this year was the first complete year as Diego Elio Pettenò (I legally changed my name in October 2008 to include “Elio” — the name of my grandfather on my mother’s side), and that somewhat made me feel a bit of a new man already. Not only I finally decided to take the step of registering as a professional freelancer in the IT world (which basically consists of getting an Italian VAT ID), but I was also able to fly!

The two things are not unrelated: since this has been the first year I worked almost full time (earlier, I only could get sparse consultancy jobs), I felt the need of getting some real vacation, again for the first time in my life. Thanks to my friends Marco and Angela, the opportunity came up last August to finally get a vacation and fight against my fear of planes, which is now moderate enough for me to want to go to FOSDEM.

And this was also the first year I spent new year’s eve night out of home, thanks to Erica and Alessandro.

For what concerns my health, with the exception of one (biggish) health scare concerning my blood sugar, and my now confirmed type 2 diabetes, it all went fine. No hospitals, which is the most important part of it. Unfortunately something bad happened this year as well, but instead of involving my health it involved my family, which has been messed up badly by an internal earthquake. It doesn’t really make anything extremely bad, but it set back my plans of trying moving to London, and at the same time reduced my freedom of expenses.

Outside of work, and family, this was the year that my friend Alberto went all the way in on his passion, and started an amateur movies group , directing his first long-running movie (1h15), which was not only projected in a local (church) theatre, but also went on air on (local) TV! I’m proud of standing by his side when I’m needed, as a technician.

On the Gentoo-side of things this year has been devoted mostly to the Tinderbox which soon should be able to graduate into a much more important project for Gentoo as a whole, and to the implementation of new Ruby eclasses which have been added in tree recently and are making me, Alex and Hans crazy to port the ebuilds to the new standard.

I’m pretty glad how things turned out with both projects, even if I do get some grief and attacks over both, they are showing that improvement is possible, even when it takes a long time to do it: the tinderbox is still evolving, but from what it started (a call to ls followed by emerge), it definitely reached a point where it’s quite usable and has very important results to provide; the eclasses were developed for over six months and are still undergoing improvements, but they are giving us all the chance to properly support multiple Ruby implementations: 1.8, 1.9, JRuby and I think Alex is already working on Ruby Enterprise Edition as I write this.

If you think I disappeared from the face of the Earth, you’re absolutely wrong :)

I am actually quite unavailable lately, because of a mixture of problems with my job’s task, of my anti-stress method (the Nintendo DS is quite cool indeed), and of the preparation for my nephew’s Baptism … 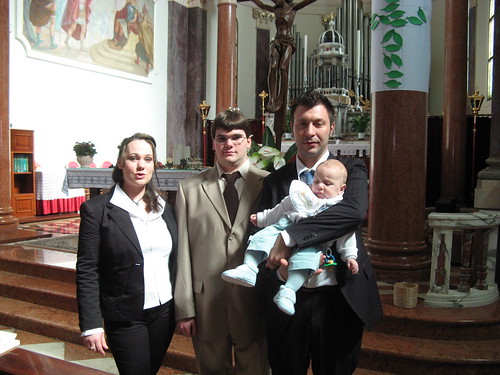 (In the group photo I’m the one in the middle.. to my right there’s my sister Silvia and to my left there’s her husband Christian, with Morgan)

I’ll be back soon with more work on Rust, merging David’s changes, and then I’ll see to decide what else I’m going to do in the future.

I’ve been able to fix a few issues with xine lately, nothing major, although it closed some bugs; hopefully 1.1.5 release is not too far away; although I did hope to get the OS X on Intel patches merged before that, I don’t have time right now, as I’m using the laptop to run the tests for my job.

Also, Farragut can’t be updated, and Prakesh and Klothos are basically paralysed as I can’t seem to find a way to replace NFS; coda is too much an overkill, and Samba/CIFS is way too slow, beside it doesn’t handle Unix permissions, and ID mapping, so it’s totally useless to me.

I’m going to see if I’ll get my job confirmed next month and if it will, I’ll buy a new box (Relativity?) to replace Enterprise as my workstation, and then move Enterprise as FreeBSD-based file and mail server, maybe database server too, I’m not yet sure. I’ll probably just put 2x320GB drives on it, and put them in RAID1, so that I can at least shield the single point of failure of my network; the OS can reside on a different 160 disk and be done with it.

I really want to return doing some useful work, but I just don’t have much more than Rust lately, and with the time limits I have lately I can’t work on any major fix or feature for xine (plus I’m still not sure why the MMX code in FFmpeg is causing harm to xine when running 64-bit (and not causing anything while running at 32-bit, for what I can tell).

First of all, I have to say that I still don’t feel that well, this flu is getting on my nerves, especially since I cannot stay with my nephew (I might be infective) and because I cannot talk enough to continue my jobs.

On the other hand, I’ve been using this time to continue fixing a few of the xine bugs I had in my black list to solve as soon as possible; a part the OggFlac trouble, yesterday I was able to also fix FLAC files with ID3 tags prefix, that was one of the most annoying bugs before a lot of people complained about that for Amarok, and the XCB work is also done, now just waiting review and commit.

Again, I’ve been looking for something to try as an hobby, and I remembered I knew an interesting free operating system, Syllable that I tried but failed to install on my system in the past. Today I downloaded the latest LiveCD (released yesterday, nonetheless), and tried it on Prakesh.. unfortunately there it failed to start at all.. I’ve then tried to set up Odissey (a recovered Pentium 3 533), but that first resulted in one of Defiant’s RAM banks burned (and one of my fingers burnt too)…

Now, I have to say that for a from-scratch operating system, Syllable (well, almost from scratch, as it is based on AtheOS) is not that bad, resembles how Linux was a few years ago to me. I’m not sure if it’s Unix-like enough for it to become a new Gentoo/ALT project, but I’ll surely try to study it some more, maybe I can port libcdio to support it, and then unieject… maybe on the long run I can make xine work, at least partially…

Yes this is my favourite kind of hobby, and now you can see why I end up always on the edge of burning out and come back :)