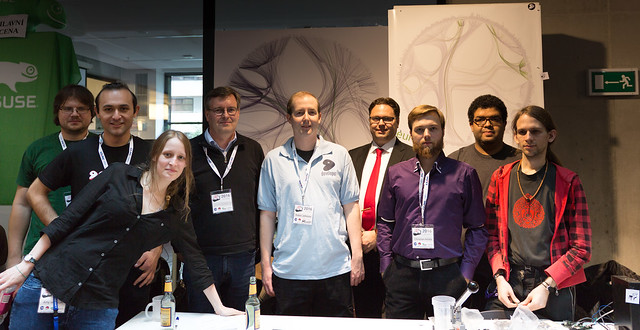 As I noted when I resurrected the blog, part of the reason why I managed to come back to “active duty” within Gentoo Linux is because Robin and Amy helped me set up my laptop and my staging servers for singing commits with GnuPG remotely.

And that happened because this year I finally managed to go to the Gentoo MiniConf hosted as part of LinuxDays in Prague, Czech Republic.

The conference track was fairly minimal; Robin gave us an update on the Foundation and on what Infra is doing — I’m really looking forward to the ability to send out changes for review, instead of having to pull and push Git directly. After spending three years using code reviews with a massive repository I feel I like it and want to see significantly more of it.

Ulrich gave us a nice presentation on the new features coming with EAPI 7, which together with Michal’s post on EAPI 6 made it significantly easier to pick up Gentoo again.

And of course, I managed to get my GnuPG key signed by some of the developers over there, so that there is proof that who’s committing those changes is really.

But the most important part for me has been seeing my colleagues again, and meeting the new ones. Hopefully this won’t be the last time I get to the Miniconf, although fitting this together with the rest of my work travel is not straightforward.

I’m hoping to be at 33C3 — I have a hotel reservation and flight tickets, but no ticket for the conference yet. If any of you, devs or users, is there, feel free to ping me over Twitter or something. I’ll probably be at FOSDEM next year too, although that is not a certain thing, because I might have some scheduling conflicts with ENIGMA (unless I can get Delta to give me the ticket I have in mind.)

So once again thank you for CVU and LinuxDays for hosting us, and hopefully see you all in the future!