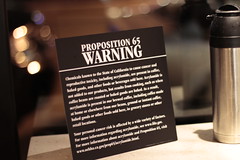 You might remember that many years ago (actually, it’s just shy of four years ago) I wrote a post about a disconcerting label I found on the box of a pair of Shure earphones I got to try to sleep better during the night when noise was coming from the outside. This was a Californian notice about the danger of carcinogenic chemicals, most likely related to the PVC in the earphones’ cord — which didn’t even last six full months! I had to trash the extremely expensive pair of earphones, because the cables ruptured behind my years; the stupid plastic was just too rigid I’m afraid.

Well, now that I’ve been in California for a while, I was expecting to see many more similar notices, but at least here in Hermosa Beach where I’m based, I haven’t seen one … until Starbucks was forced to put on. I actually did find out something more about those notices before, as Amazon has a page which is linked in your order when you’re shipping something in California that should have the label attached.

Now the title of this post is obviously inflammatory, I know that and it’s half-intended, but my problem with all of this is that when I wrote about that stupid label, I didn’t really know much about the whole thing — I’ve been told right away in those comments that the labels are extremely common in California, a few months ago I finally found that it was a popular ballot that actually put the law into place… and now I feel like something’s extremely wrong in this place.

Really I feel this is one of the most stupidest warning people can have on things, and somehow, for once, it makes me feel better thinking that in Italy, referendums are only used to vote laws off, not in…

5 thoughts on “My Time in the USA: Democracy is overrated (or, the return of the stupid label)”