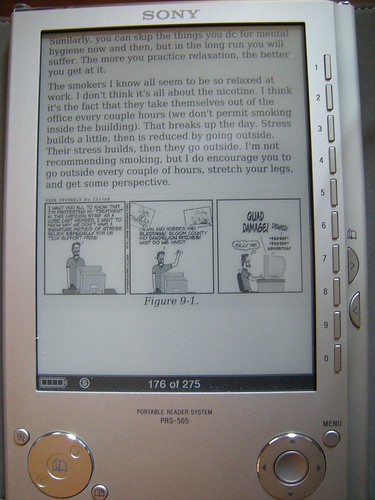 I’ve been told I’m overly negative and critical about everything, be it Free Software or not… probably it’s true, the problem is that in my line of work, I always have to end up thinking for the worse, and that shows in my general behaviour. I’d rather be proven wrong, that something works fine, rather than be proven wrong that something crashes in flame.

But for once I am happy about something and I’m going to write about it. And going against the current trend, I’m also going to start with a “thanks, Sony!” — although this is not related at all with the PlayStation 3, of course.

Do you remember two years ago I bought a Reader (Sony PRS-505)? I’ve been using it on and off since then, although I ended up using it mostly for smaller things, plain text converter to LRF and similar, rather than full-blown books because of the problems with viewing PDF files.

Well, yesterday I received an advert from O’Reilly, where I bought some of the PDF books I have, and I noticed this line: “PDF, .epub, Kindle-compatible .mobi, and Android .apk” (with a link to a blog post announcement about the support for ePUB in the Reader… as it was, it happened just while I was playing with the Reader for most of my time and it always escaped me… probably because that was the time I ended up in the hospital as well).

The reason why I actually read through this O’Reilly advert (I admit I don’t usually look at that stuff much; I don’t send it to spam, but most of the promotional messages get sent to a different folder/label and it gets cleared out pretty soon), is that I am probably going to buy CJKV Information Processing as soon as I have time to read it (I was actually almost going to buy it right away because I needed it to finish a job, but since the customer might actually be considered “at risk” to me, this is not the case anymore).

Anyway, since I read this particular note I decided to go on to look at the O’Reilly website; after logging in, the “Electronic Media” section wasn’t working properly (I only got a “Data Error” loading), but a mail to O’Reilly (and about two hours) later, I could finally see the books I bought in June 2008, available in many different formats. Not all of them were available in all the formats, but all of them were available in PDF (which I already got) and ePub (which is what the Reader reads). I downloaded them, and went to the next step, getting them on the Reader itself.

The problem here was that… it had been months since I last used the Reader, so its battery was totally drained; it wouldn’t be such a problem… but it doesn’t charge via USB when it’s drained, it needs an external charger. While it has a connection for that, it didn’t come with a charger (and even that would have had limited use to me, given that this model wasn’t sold in Europe so in the best of cases it would have come with an American adapter). But now the connection looked more familiar to me, with a yellow color-code. A quick search later it turns out that Sony did something good: it uses the same charger cable than the PSP (PlayStation Portable)… which I got since last year, it was a Christmas present from my sister.

I actually wondered a bit about the relationship between the Reader and the PSP: not only they have the same charger, but they both use MemoryStick Pro Duo cards (and as I have used the SD card for other things, namely photos, since last time I used the Reader, I have set it up with a Memory Stick this time; I had a 1GB one floating around since I changed the PSP’s to 4GB to store digitally distributed games). On the other hand, Sony seems to have had enough common sense to support SD as well on the Reader.

Charged the Reader up, copied the ePub over with Calibre… it doesn’t find it, because I didn’t update the firmware when it was released. Okay, time to look for the firmware update, which can, obviously, be found on the Sony product page… but only for Windows. Now this is not nice, but it’s all too common… and similarly to Nokia, there is an absurdity: the management software is available for Mac OS X as well, but the firmware updater isn’t. Sigh. This is why I keep Windows virtual machines around.

After the upgrade, and after uploading all the books to the Reader, I was finally able to try it out, and the result is hell sweet! The O’Reilly ePubs look much much nicer than the sample books shipped with the reader itself, very readable even at “small” size. I’m most likely going to get the CJKV book named above from O’Reilly at this point, to read on the Reader (reasoning being that I’m scheduled to go around a lot in the next month, and going around with a 900 pages book on Eastern languages, in English, in Italy, really sells me away too much of a nerd… beside being clumsy).

This is a photo of my Reader displaying a page from the book Time Management for System Administrators that I’ve last been struggling to read with the “previous Reader” (which is actually the same hardware, but it really feels like something new now that I can use ePub). You can see from the photo that it reads actually quite nicely.

Sure, this model is now considered quite obsolete: it has no touchscreen, it’s slow, it has no wireless connection, and all that stuff, but it feels quite solid, and even if it’s two years later, the firmware update really gave it a new spin. And of course, given this version is basically “end-of-lifed”, there is an alternative Free firmware (given that the original firmware is based on Linux, this is not surprising), which seems to bridge some feature-gaps that were missing before.

Now, can somebody point me at some other publishers of ePub material? I don’t expect much to be available in ePub format for what concerns narrative, but maybe there is something out there. For what I can tell searching quickly, WHSmith has an eBook store, and it seems to have quite a few things that I’d be quite interested in (for instance the Wheel of Time series)… there are two problems with that: the books are only available as “Adobe Digital Editions” (so, DRM-locked), and I have no clue whether they sell to Italian customers. I could probably give it a try, the reduced price can be acceptable for some stuff at least. Unless, of course, it can be cleaned up in which case I’d probably give a lot of money to WHSmith…