Continuing the story of building my own custom-tailored router, I have to say that sometimes, the problems present are nowhere near being Gentoo problems: they are upstream problems.

Among these problems you can find for instance ntp forcing readline (my router would work perfectly fine without readline), and lilo not playing nice with installing on an USB compact flash drive without trying to guess what the BIOS will say about it to begin with.

Indeed, most of the problems I’m likely to encounter are due to brokenish software that is not designed to work in those cases; of course this is no good excuse for ignoring the issues altogether: indeed we should most likely fix those things and patch it out (for instance see automagic dependencies which we have documented properly).

And for those who asked, this is a photo of the current status of the router: 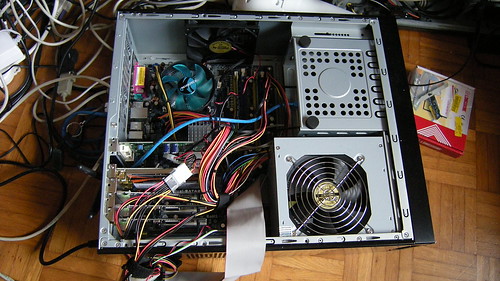 The case is one designed for HTPC; it seemed the best choice to have something that looked at least nice: the bad side is that it has some faux-DVD drives on the front, the good side is that it has the USB ports hidden by default. The mainboard is an ASRock, no clue about the specs themselves, it has a 2.8GHz Celeron CPU, an on-board Via Rhine network card, an Atheros AR5008 wireless card and three Sundance network cards (I bought four to make sure that if one is faulty I don’t have to have three network drivers loaded — I would have preferred having a single model of network cards, but it’s difficult to find the name of the chip on whatever card when you buy the cheapest available in the shop). Since I’m currently considering wiring up my whole house (and possibly the garage so I can actually move my servers out there) with gigabit cables, I might switch one of the cards for the Intel Pro/1000 I have at home so that it would talk the right speed. Inside the case there’s a D-Link ADSL2+ pass-through modem, connected to the Rhine; of the other three cards, one I’ll use as console, and one is going to be connected to the IP phone downstairs.

Also, since this system sounds like the perfect case for it, and the shop opened just today, I wanted to get an entropy key for it (no input from the system, no harddrive, and I’m going to use this with OpenVPN as well). Unfortunately it seems like I was the first European VAT-registered customer, and the procedure isn’t exactly up to speed, yet. Hopefully once this is cleared and I’ll get the keys, I’ll be packaging the software to use them under Gentoo (since I’m going to use it in the router, I’ll be getting two, one connected to Yamato so that I have a test source).

Right now, I’m trying to find how to make syslinux boot my flash drive since lilo fails and I don’t think I want to try with GRUB… SysLinux would be an option, but it looks to me like extlinux (for using with ext2/3/4 partitions) works as intended either. If somebody has another idea, I’ll be happy to know!