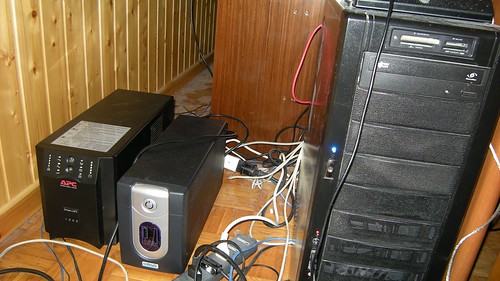 Those reading my blog or following me on identi.ca might remember I had some problems with my APC SmartUPS, with a used up battery that didn’t work properly. After replacement, I also had some troubles (which I’m not yet sure are worked out now to be honest); and at the end I settled for getting a new one to replace or work side-by-side it if it’ll work out properly. This is why in the photo above you can see two UPSes and one box (Yamato), even though there are actually three here (just one other turned on right now, though).

I’m not sure what has caused it, but since a little before I actually started activity as a self-employed developer and consultant, I’ve had huge hardware failures: two laptops, the very same week (my mother’s iBook and my MacBook Pro), the drum of the laser printer, the external iomega HD box (which was already a replacement for the same model failing last November), and lastly the (software) failure of the PCI soundcard.

Around the same time I also ended up needing some replacement for hardware that was now sub-optimal for my use (the Fast Ethernet switch was replaced by a Gigabit one because now there is Merrimac – my iMac – always turned on, and it makes heavy use of networking (especially with iSCSI), the harddisk, which there themselves replaced just last March, and helped out by one out of two disks in the external box, started being too small (thus why I got an extra one, a FreeAgent Xtreme running on eSATA, for one more terabyte of storage), my cordless phone required me to get another handset so that my mom’s call wouldn’t get to bother me, my cellphone (just recently) is being phased for a Nokia E75 so I could get a Business account (it was a Nokia E71 before), I got an HP all-in-one so that I had an ADF scanner to go in pair with the negative film scanner for archive purposes, and some more smaller things to go with that. I should also update, again, the router: after three years of good service, my 3Com starts to get the hit of age, and also starts to hit on limitations, including the very artificial limit of 32 devices listed in the WLAN MAC-addresses (and the fact that it doesn’t support IPv6).

Then there have been costs much more tied to work (not like the stuff I have mentioned is not part of my job anyway), like proprietary software licenses (Parallels Desktops, Visual Studio 2008, and soon Microsoft Office, Avira and Mac OS X Snow Leopard) and the smartcard reader. And of course rents for the new vserver (vanguard) and phone bills to pay. Given the amount of work my boxes do during the day, I’ll soon switch the power company over to me rather than my family and pay for that too, unless I decide to move the office on a real office (possibly one I can stay at any hour), and just keep one terminal at home or something like that (but then, what would I keep?). Oh and obviously there are a few more things like business cards and similar.

Now, all these are work expenses, so they are important up to a point; I actually get paid well enough to cover for these at the moment, even though I have now a quite funky wishlist which includes both leisure-related and work-related items (you’re free to help me with both, j/k). The problem is that I would have been much better off if I didn’t have all this mess. Especially considering that, as I have said before, I really wish I could get out of home soon.

But anyway, this is still work time!