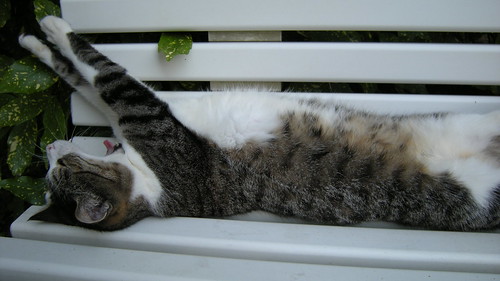 Since I doubt you’d be able to understand what I mean from the lolcat-speech title, let me try to summarise it in a language that nears a lot more what people actually speak (yes I know it’s still going to be too technical for some of the readers, but I guess that cannot really be helped).

Last night I couldn’t sleep, for a series of reason, not last that to make sure I could implement some stuff for my job while waiting for the actual definitive specs, I took three coffee cups, which while making me feel very nice, stops me from sleeping; not so nice when your neighbours woke you up two days in a row fighting, but I can manage.

Since at the time I was waiting for the chroot to complete some builds so I could check and submit a few more bugs (the count of “My Bugs” search on bugzilla now reaches 1200 bugs and has some reserve too), I decided to try something different. I already have been adding to my git repositories changes to a few libraries I contributed to in the past enough buildsystem so that --no-undefined is added, so last night I decided to go with doing some work on ALSA upstream repositories.

I already had checked out three of the repositories when 1.0.18 was added to the tree, since I had to fix an --as-needed issue and decided to just go on and submit all the patches to upstream for merge, this time I checked out alsa-lib, added --no-undefined and then started some analysis with ruby-elf tools cowstats and missingstatic, as well as removed a few compiler warnings, just to make sure I wouldn’t be distracted by faux problems.

The result should now be that the alsa-lib and alsa-plugins libraries have a few dirty pages less, and that the code is a bit more solid than before, with added static and const modifiers where needed. It wasn’t much of a work, but I forgot once again to add -s to the git commits so I had to rewrite history to get the Signed-off-by header to all the commits; if somebody knows how to set git per-repository to always use -s when committing, I’d be very glad.

On the other hand, this task shown me that cowstats still had and has some problems, in particular, it lacked a way to separate .data.rel from .data.rel.ro sections data. This is important to distinguish between the two since .data.rel.ro is fully prelinkable, which means after a prelink it would always be loaded from the disk without further relocation, while .data could still cause copy on write because it can be changed at runtime even after relocation.

This is even further understood by noticing that shared objects built with GCC under Linux have .data, .data and .data.rel.ro, but no .data.rel which is instead merged back into .data itself. But because of this the “real” data count in cowstats is entirely out of reality. I’ll have to rewrite that part most likely.

Anyway, I’ve done my best and hopefully tomorrow more of my patches will be merged in, so that alsa-lib’s dirty pages get reduced again. Unfortunately even after my changes, with all the plugins enabled, and in the worst case scenario, libasound.so will go on requiring more than 28KiB of dirty pages per process (minus forks and various preloads). Which is not nice at all. Prelinking can reduce the dirty pages removing these 28KiB (which are all of .data.rel.ro), and then it would just require a couple of pages.

There is one question though that now is driving me nuts: hasn’t Nokia worked on ALSA for their N800 tablets? I know alsa-plugins has a Maemo plugin (which I also cleaned up a bit last night, as it had quite a few hacks on the autotools side, and an unwarranted use of pow() instead of using left shift), but I’d expect Nokia to know better about having so many dirty pages…

Anyway, for all the remaining users, I strongly suggest you look into removing some of the plugins that ship with ALSA, like the iec958 plugin if you don’t use digital pass-through. By cutting down the amount of built-in plugins you should be able to reduce sensibly the memory that alsa and the applications using alsa would be using on your system.

-I also wonder why didn’t I add an USE flag to disable the alisp feature- Sorry, of course I wouldn’t be able to find an alisp USE flag if I check the output of emerge -pv alsa-utils. D’oh!. Why does ALSA need a LISP interpreter anyway?