It has been a few months since I last written about power outages but history repeated itself again yesterday.

There has been a tiny hurricane in my area yesterday, a lot of trees had their branches, and their tips, broken out, included the pine you see in this photo from last March: 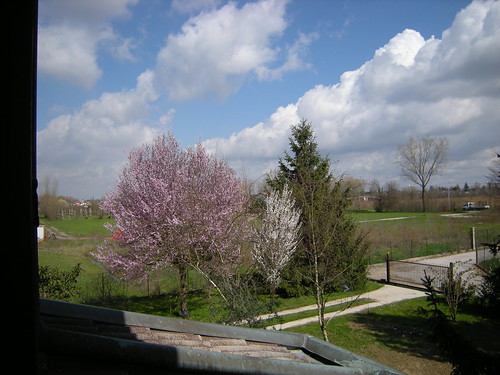 Some branches, and a tree, ended up falling on the power cable, so after the “hurricane” there has been a little outage for about an hour and a half, that’s fine, it’s quite common and understandable.

Less understandable is that, about six hours later, the power company takes the power again without warning. Their phone service not updating on the status of the outage, and their technicians not in the known about when it would be fixed. I called them again at 1.30 again, and they told me to “be patient”, as they had four people on the job, and a mess to fix, on another line before they could check mine.

The power returned at 5am, it means a 6 hours downtime. Luckily I had my DS charged so I played a bit. I could connect with the laptop for a few hours, but the battery runs out quite quickly when it’s locked on the cellphone to get the UMTS connection.

Sigh, again, not the best place to live for me, I guess.