In my quest for some nice smartcard or USB crypto token to use for authentication instead of keypairs (for which I started considering the Italian electronic ID card, once I change my documents, which happens to be this summer), I’ve noticed how, for laptops lacking ExpressCard 54 or PCMCIA, people tend to suggest using USB readers for SIM-sized cards, most of which seems to be intended first for actual GSM SIM cards.

This made me think that I do have an USB SIM card reader, I just have no idea how to get it to work under Linux. 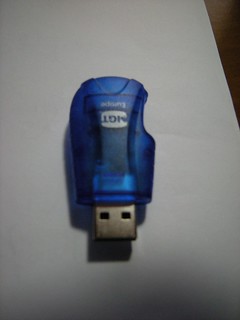 The device is reported with USB IDs 05e3:fd21 (which in the usb.ids database is registered to “Genesys Logic, Inc. 3M TL20 Temperature Logger” – which doesn’t seem to be related to what I have at all).

I have drivers for Windos for it, but I haven’t tried them myself, not yet at least. The setup program I have, once ran under Wine, installs some software by Innoproducts, called “SimEditor (IT01)”.

This software seems to contain, beside some manuals, an installer for some “flash disk driver”, and a driver for the actual USB device. Interestingly, the setup for the USB device consists of three files, two DLLs (one for 9x, one for NT), and an executable, all three compressed with UPX. The installer seems to be created with Borland’s or CodeGear’s C++ Builder, I see references to Delphi, and to TForm, but the giveaway is the System::AnsiString string in it. As a style information, they didn’t name everything properly, I see references to TForm1 and Unit1, which are the default names for forms and units in C++ Builder. Further looking at the strings report the copyright to Borland Corporation from 2002, so it’s pre-CodeGear time.

The INF file (knrusb.inf) dos not seem to report any vendor name, but looking for 16-bit little endian strings in the installer (if you ever hacked under Windows you know that it mixes pretty nicely ASCII and UTF-16 strings) finds the actual authors of the driver: “Copyright © 2004-2005 Kooner Technology (H.K.) Co., Ltd.”. Unfortunately I can’t find an email address for them to ask.

Does anybody know about this device? Do anybody know a way to contact these Kooner Technology? (I have an hotmail address from the whois, but I’m a bit wary of that, I’ll try it anyway).

Do anybody have any suggestion beside using USB snoop under Windows to see what it’s going on with the device? (and does anybody know for anything running under Windows XP, which is the only Windows version I have a license for?).